The Nuclear Crisis Is Ongoing, Yet It’s Not Hopeless

In former evacuation zones of the Fukushima nuclear disaster, although the government of Japan pronounced it safe to resume normal life, some returnees found such a life elusive. To make life possible on their once-abandoned land, they decided to tackle radiation in their own ways. This essay presents the story of a farmer and a group of citizen scientists who practiced the decontamination of their lands and monitoring to grapple with the uncertainties of lingering radioactivity after the disruption of the nuclear fallout.

Teaser Image Caption
Muneo-san’s rice paddies. The “Resurrection of Fukushima” (RoF) experimented the Madei method to study the transference of radioactive cesium from soil to rice.

The village of Iitate is located in the Abukuma mountain range in Fukushima prefecture, 50 kilometres northwest of the Fukushima Daiichi Nuclear Power Plant. Three-quarters of the village occupies forested land at an average altitude of 450 m. It was home to a population of 6,000 people who were scattered over 250 square km of mountainous, forested terrain. For subsistence, villagers produced rice, vegetables, and flowers while raising cattle for beef and milk. Beginning in April 2011, the Japanese government imposed an evacuation order on the entire village, until the Ministry of the Environment proclaimed that Iitate had been “decontaminated” and villagers were “safe” to return, in 2017.

Before my first visit in the summer of 2015, I had thought that Iitate would be ruined like the ghost towns close to Chernobyl, where a precarious life had awaited the returnees. Nonetheless, on 9 February 2020, Japan’s Minister of the Environment paid a visit to an experimental greenhouse that had used contaminated soil to grow flowers, and met a group of villagers in Iitate’s renovated town hall to listen to their “hope to returning homeland.” Nine years after the nuclear disaster, the Japanese government tries to show that all previously forced evacuated zones are decontaminated, and people are safe to resume lives in their once abandoned homes. 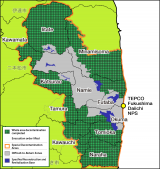 Environmentalists and anti-nuclear activists do not agree. Local groups and international NGOs, like Friends of the Earth Japan and Greenpeace, have been conducting monitoring surveys to report on hotspots and raising great concerns on the Environmental Minister’s proposal to “recycle” low-level radioactive soil in agriculture and construction of public facilities. A Greenpeace campaigner told me, “the radiation remaining in the forest [of Iitate] is so high that its access should be forbidden. People who are returning function like they are living in jail, they can only stay in their houses.” Against the official propaganda, they claimed that lingering radiation stays at a dangerous level, and its mobility would bring new risks to people’s livelihood; therefore, Iitate is unsafe to return.

Like these campaigners, I found the decontamination work of the government patchy and leaky during my fieldwork in Iitate until the summer of 2017. Yet, after I followed Muneo-san and other members of the Non-Profit Organization “Resurrection of Fukushima” (hereafter the RoF), I considered a new ordinary life is possible—mediated by technologies that are implicated in the ecological contamination shaping the damaged landscape, and generative of practices to grapple with the sense of uncertainty and insecurity through a fine-tuned awareness towards the altered ecologies which is now infused with radiation.

In this essay, I will tell the story of Muneo-san, my host and one of the earliest returnees, who restarted farming through the collaborations with the RoF. It is not my intention to overstate the capacity of ordinary people to respond to a disaster like nuclear fallout; nevertheless, we might take a cue from them about how people tackle big problems by inventing their own way of doing science when they are forced by circumstance to try.

Soil as the “Skin of the Earth”

After Muneo-san decided to return to Iitate, he joined a group of citizens and scientists to form RoF to reconnect people with their disrupted environment. RoF experimented with multiple methods to decontaminate Muneo-san’s rice paddies and monitor the surrounding environment; they also explored the cultivation of new crops and alternative ways to regenerate the forest. Otherwise put, they tried something that the ministries had considered for reinvigorating Iitate.

The Ministry of the Environment (MoE)’s decontamination efforts targeted a governable environment that was demarcated through the dosimetric assessment endorsed by new national laws enacted after the disaster. It first divided the entire village into two zones: one in which radiation levels could be reduced to 1–20 mSv of annual external exposure; another zone consisted of forest and woodland areas that covered 75% of the village. The area between forest and human inhabitable land—the satoyama—was deemed manageable by felling all trees. Next, roofs were swept, and pavement was washed using high-pressure cleaners; the separated residues of decontamination were loaded into flexible container bags, commonly known as “black bags.” Finally, farmland was decontaminated by stripping the topsoil using excavators. Over 2,500 hectares of farmland and rice paddies were decontaminated, generating over one million black bags of radioactive waste. Such a large number of black bags created a foreseeable storage problem.

Note that the MoE has left the forest untouched; during the rainy season, runoff rainwater sometimes mixes with mud, sand, leaves and branches from the forest to form a suspension that may contain radioactive contaminants. Besides, excavator operators had stripped the most fertile topsoil. However comprehensively the instructions were written in the MoE’s handbook, an excavator operator might not have the know-how needed to scrape 5cm of topsoil when farmlands were decontaminated. Although it also mentioned that the preservation of fertile topsoil as much as possible was desirable, there was no punishment or disadvantage for overdoing by the mechanical power of excavators and bulldozers in practice.

Topsoil was then replaced with pit sand that was called by villagers “guest soil” (kyakudo). To Muneo-san, however, the pit sand was totally alien to his farmland; therefore, he experimented Prof. Mizoguchi’s decontamination method in order to retain as much soil and nutrients as possible.

Prof. Masaru Mizoguchi, soil scientist and a core member of the RoF, also said that it was not uncommon among the operators to dig deeper; after all, it was not “wasteful” to stuff black bags with contaminated things. Yet, to Prof. Mizoguchi, the ideal approach to decontamination should aim at the preservation of fertile topsoil, instead of relying on massive machines that converted fertile topsoil to gigantic volumes of waste soil. On Muneo-san’s farmland, Prof. Mizoguchi and RoF volunteers tested what he called the Madei (までい) method—members of RoF flooded it with river water, and then agitated the soil surface by repurposing a rotary weeding machine of a type that every family owned for the removal of weeds from farmland. By agitating the soil surface, sedimentation of clay molecules in the soil left the radioactive cesium in the muddy surface water, which could be swept into a drainage ditch with a brush. Madei comes from the local dialect, meaning “go to any expense, respectfully, take the time to do, with one’s whole heart”; also, the scientific principle behind this method was straightforward and comprehensible from the villagers’ perspective.

Prof. Mizoguchi proved that after the water vaporized, radioactive cesium would slowly penetrate into the soil in the ditch and be trapped at a depth of 6-7cm. Meanwhile, the radioactivity of the farmland was drastically cut down by 80%. To prevent weathering effects or leakage due to wind or heavy rain, a clean layer of soil was spread to cover the ditch. Afterward, Prof. Mizoguchi installed a “Field Monitoring System (FMS)” to keep track of the radiation trapped in the drainage ditch, which was powered by solar panels to transmit data to a database via the mobile network and accessible through the Internet.

Unlike the MoE’s topsoil decontamination approach, in the Madei method, radiation precipitated in the experimental field is not separated but rearranged. Notably, radiation is transformed in situ to become part of the local environment; such disposition of radiation has added a new dynamic to local ecology that requires continuous monitoring by volunteers until its depletion has reached a safe level. Meanwhile, through sensors and the Internet, the visibility of radiation is mediated by charts and numbers rather than extravagantly displayed in the form of black bags. Rather than being concentrated and accumulated, radioactive topsoil is transformed into a distributed network of drainage ditches; hence, demand for temporary storage ground will be dramatically reduced.

In 2018, I returned to Iitate to visit Muneo-san. He showed me a new greenhouse and the crops he was growing. He also gave me a gift, a bottle of Japanese sake made from the rice grown in his paddies. His rice has passed through the food safety inspection implemented by the government since 2013.

Like the Chernobyl accident, the Fukushima nuclear disaster is an ongoing crisis when we look at the radioactive waste produced by decontamination work in former evacuation zones and its repercussions on people’s livelihood. A disaster as multiple and unbound as a nuclear fallout has revealed the incapacity of governments. In Japan, food safety, elderly care, and children’s health are unreconciled domains between the government, people in Fukushima and the citizenry after the fact of the patchy decontamination and possible recontamination caused by the radiation sunken in forests. Left unmentioned is the impact on fishers if the government allows the dumping of the radioactive water currently stored at the power plant. Yet, Japan presents a very different case from that of Ukraine and Belarus, where ordinary citizens had little access to decontamination or radiation-monitoring technologies. Japanese citizens have incorporated technologies to create collaborations to explore the pursuit of livelihoods that fall outside the government’s plans. Muneo-san and the RoF are one of the examples that we might want to take a cue from when we face the “big problems”—whether it be climate change, wildfires, or a pandemic— the capacity of citizens and the intensity of technologies will be the matter of concern.

The Fukushima Disaster and the Tokyo Olympics

Commentary
Nine years after the Fukushima nuclear disaster, fundamental issues remain unresolved. Many domestic critics saw the Olympics as a ploy to distract from the nuclear disaster. The larger question remains: Should a country with an ongoing nuclear disaster be hosting these games?
By Koide Hiroaki