Usage: From a Blessing to a Curse

Plastics have made life convenient for the world, but exponential growth and misuse have brought problems to Asia, a region unprepared for the resulting deluge of plastic waste.

Since the 1950s, when plastics started to take off in the mass market, over nine billion tonnes of these materials have been produced globally – a total equivalent to over a tonne per person alive today.

Durable, lightweight and inexpensive, the properties of plastics have made them ideal for use in many different products and everyday items, being found in cupboards and dressers, smartphones and cars, buildings and roads, and even aeroplanes.

Plastics are impermeable to gases and liquids. This has enabled the type of plastic known as polyethylene terephthalate (PET) to become the material of choice for soft drink bottles.  The versatility of polystyrene, which can be stiff, brittle, clear, or made into a foam, makes it highly suitable for protective packaging and food containers.

Heavy industry has found plastics equally adaptable. Plastic materials can be created to tolerate wide changes in temperature while their resistance to corrosion and certain chemicals enable them to be used in everything from marine vessels to aircraft. Plastics’ long service life and their resistance to mould and corrosion make them practical for the construction sector. Their flexibility, ability to withstand vibration, and the fact that they do not rust have also seen them become important in car production. 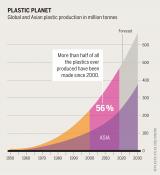 Although plastics’ original use was as a high-quality material providing an alternative to ivory or horn, packaging and single-use products are now key business streams.

Packaging accounted for almost one-third – or 115 million tonnes – of global plastic production in 2015, with durable applications for building and construction, transportation, and consumer and institutional products representing only around half of the amount of plastics that goes into packaging.

Production and consumption of plastic packaging do not solely encompass downstream consumer use. Appliances and car parts, among other products, may also use plastic packaging. However, it is litter comprising plastic bags, plastic bottles, and single-use sachets that has become the most obvious image of plastic waste in Asia.

Waste disposal has been a growing problem for many countries in Asia. The increasing volume of plastic waste and lack of waste management infrastructure are causing environmental problems ranging from congested dumpsites to plastic pollution in natural environments.

South Korea generates the most plastic waste per capita in Asia, at 98.2 kilograms per year. This is one of the highest per-capita plastic waste ratios in the world. Other Asian countries, namely Malaysia (78 kilograms), Thailand (64 kilograms), China (63.5 kilograms), and Vietnam (40 kilograms) are catching up while Indonesia (18 kilograms) and India (11.6 kilograms) remain at the lower end of the scale.

Several countries in Asia have considered ramping up recycling in response to the plastic waste problem. However, even highly developed economies such as Japan and South Korea have not fared well with recycling plastics. The majority of plastic waste in the region is still burned or buried, and since a 2018 ban on plastic waste imports by China, a former major importer, such wastes have been increasingly exported to other countries in the region.

Some Asian countries have now imposed or strengthened bans and levies on selected single-use plastic products; and Southeast and South Asian nations have started following China’s lead in stopping plastic waste imports from entering their ports.

Unfortunately, the COVID-19 pandemic has compounded the plastic pollution problem, bringing increased demand for single-use items and double-digit increases in plastic waste generated in Thailand, South Korea, Malaysia, and Hong Kong, among other Asian countries and cities. The increase in plastic packaging produced by the e-commerce and express delivery industry in the region is another concern.

Usage has turned what was first viewed as a blessing into a curse. Current estimates indicate some 40 percent of plastic products become litter after less than a month, an unworthy end for an invention that was supposed to improve modern life.

Given that only 10 percent of the more than nine billion tonnes of plastics produced since the 1950s have been recycled, the best solution appears clear: don’t produce so many plastic products in the first place.