Refill, reuse, and recycle used to be the norm in Asia, where people threw little away. Life today is totally different, with plastic rubbish threatening to overwhelm the region.

Varied as people’s lifestyles are across Asia, a throwaway culture has traditionally had little place in any of them. Instead, thrift and conscientious consumption were more the rule than the exception.

The Japanese mottainai mindset abhorred waste. Filipinos bought items in micro-retail amounts, using reusable containers. The Myanmar tradition of Yea Ku Tho, where water is given away to gain spiritual merit, led to free water refill stations all over the country. Packaging at traditional Asian markets was invariably biodegradable and minimalist.

But after World War II, global economies started to be driven by the need to consume ever-increasing quantities of resources. When plastic packaging was introduced, manufacturers saw a chance to save money and simplify supply chains. By the early 1960s, billions of plastic items were starting to enter dumps, landfills, and incinerators in the western world.

The shift to throwaway packaging was gradual at first, until Coca-Cola introduced a single-use plastic PET bottle to replace its iconic glass bottle in the late 1970s. Plastic then took hold globally.

By the mid-1980s, single-use plastics were widespread in more developed economies all over the world, propelled by the desire of food and beverage producers to consolidate new markets in distant locations and just as emerging economies in the region were starting to follow the development model pioneered in the western world. A throwaway lifestyle was seen as a sign of modernity, with single-use plastic straws, plastic bags, polystyrene plates, and polypropylene utensils for takeaway food forming the material basis of daily life. Everything could be acquired quickly, was easy to consume, and what was left could be dumped in the bin.

Japan led the way in extensive use of one-time plastics, while other Asian countries’ buying habits also began to change. In the Philippines, the tingi system centres on the sale of small quantities of a product to make items affordable to minimum wage earners. Sachets, made from plastic, soon became a marketing strategy for selling to consumers who could not afford to buy in bulk. India was an even earlier adopter of sachets for the sale of fast moving consumer goods.

However, mini-portions result in a drastic mismatch between the packaging needed per product unit. In addition, they boost consumption. With no solution available for the disposal or recycling of sachet packaging, the litter that ensued has grown into a massive problem in many Asian countries.

Bottled water is another example. This can be a catastrophe in places where drinking water supplies are inadequate and people resort to buying plastic bottles of water. Without a functioning waste disposal system, communities drown in a flood of plastic refuse. Producers offer no solutions for disposal or recycling the plastic bottles. There is little incentive for recyclers to collect them, and even fewer ways to dispose of them in an environmentally responsible way.

Rapid globalisation, urbanisation, and economic growth have thus brought a lifestyle driven by convenience to Asia. The resulting plastic waste problem is aggravated by the lack of effective law enforcement, and collusion of political and business interests. In the case of Myanmar, legislation is still dominated by the belief that nature takes care of waste in rural areas. This has led to a neglect of such areas in national and regional waste management strategies and forced rural communities to develop their own waste mitigation solutions. 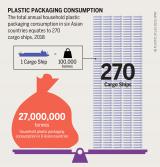 Recognising the scale of the problem, some Asian countries have started to respond, with commitments ranging from reducing consumption of single-use plastics and bans on single-use plastic bags to action plans on marine litter and attempts to address plastic use at the design and production stage. However, the COVID-19 pandemic has hindered these efforts, making it even more urgent for countries to start or restart plastic reduction campaigns.

In Hong Kong SAR, Greeners Action, an environmental organisation, has sought to discourage the default provision of plastic umbrella bags, cutlery, and packaging in shopping malls and restaurants, and reward conscientious establishments with environmentally friendly badges. In South Korea, there are now more than 20 Zero Waste shops where consumers can buy goods with minimal packaging or household consumables in bulk using their own containers. In the Philippines, a local food manufacturer has set up a kiosk where consumers can bring their own bottles and buy refills of frequently used condiments.

While these endeavours may help to move consumers away from a throwaway mindset, it is supportive policies and legislation that would help them grow to a scale that delivered a large and lasting impact.