Strengths and Limitations of the Korean Green New Deal

In July 2020, the South Korean government announced its New Deal, which included a list of investment projects to propel the country into a green economy. However, emissions targets for 2050 were only unveiled three months later, and despite this positive sign, there is much work still to be done to solidify concrete policy measures towards a carbon neutral society.

Amid the on-going Covid-19 crisis, the South Korean government published its forward-looking Korean New Deal: National Strategy for a Great Transformation in July 2020 as a road map for the country of 51 million in a post-pandemic world.

The policy document appeared in line with the government’s proactive approach to the Covid-19 crisis, with South Korean President Moon Jae-in taking decisive action to fight the coronavirus since early 2020, and mobilising medical, digital, and fiscal measures, including more deficit spending, to do so. After the Third Supplementary Budget of 2020 to support job security and the Korean New Deal, government debt is set to reach KRW 839.4 trillion (USD 760 billion) or 43.5% of GDP compared with KRW 740.8 trillion (USD 677 billion) in 2019, according to the Korean Ministry of Economy and Finance.

This article will explore what the Green New Deal is, what it means, and how it compares with similar policy proposals in the European Union (EU) and the United States. The new climate change targets announced by President Moon in October 2020, committing South Korea to achieving carbon neutrality by 2050, will also be assessed in term of their impact on earlier criticism of the Green New Deal by environmentalists as insufficient for the country, the sixth largest CO2-emitter globally, to meet the international emissions targets needed to rein in climate change.

The Korean New Deal was introduced as a national development strategy to support Covid-19 recovery and to lead international efforts to adapt to structural changes needed to support the post-pandemic digital and green economy. Under this policy proposal, the government incorporated a financial package totalling KRW 277 trillion (USD 249 billion), including the Third Supplementary Budget (Korean Ministry of Economy and Finance 2020). The projected cost for the Green New Deal is KRW 160 trillion (USD 144 billion) by 2025 (Figure 1). 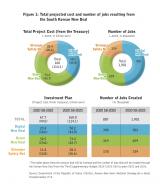 As stated in the Korean New Deal: National Strategy for a Great Transformation (English version, P10) the plan encompasses three major objectives. The government aims to transform South Korea into (1) a smart country at the centre of a digital transition based on data, networks, and artificial intelligence infrastructure; (2) a green country that achieves a balance among people, nature and growth through a green transition towards net-zero emissions as a responsible member of the global community; and (3) a safe country that invests in human resources to create a strong employment and social safety net. 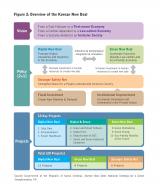 This section assesses the Korean Green New Deal in comparison with similar proposals in the US and EU (Table 3), in particular in terms of quantitative greenhouse gas reduction targets and investment, to explore the validity of the claim that “South Korea’s Reforms Should Not Be Called a Green New Deal”, an article by Lee Yujin in September 2020. Lee is a researcher at the Green Transition Institute and a former co-chair of the steering committee of Green Party Korea. (For a qualitative evaluation on further construction of coal power plants or the Green New Deal’s exclusion of sectors such as agriculture, biodiversity, waste and pollution management, etc, see Lee 2020).

The United Nations’ Intergovernmental Panel on Climate Change (IPCC) has stated: “Global net human-caused emissions of carbon dioxide (CO2) would need to fall by about 45 percent from 2010 levels by 2030, reaching ‘net zero’ around 2050”, along with “rapid and far-reaching” transitions in land, energy, industry, buildings, transport, and cities to limit global warming to 1.5°C (IPCC 2018).

While Sanders’ proposal, Biden’s plan, and the EU Green Deal clearly envision reducing greenhouse gas (or CO2) emissions close to zero by 2050, the South Korean government’s Korean New Deal, as published in July 2020, did not state such a clear target. This meant the existing greenhouse gas reduction target (nationally determined contributions) therefore applied, which stated there should be a 37% reduction from business as usual (BAU) in 2030 (see Climate Transparency 2018). This target corresponds to 24.4% from 2017 level. As such, the South Korean target was far less ambitious compared with the Sanders and EU plans, and did not meet the IPCC’s call.

The planned expenditure for the Green New Deal (together with the Stronger Safety Net) is USD 91.6 billion (KRW 73.4+28.4 trillion) in a time frame of five years, which corresponds to 1.1% of annual GDP. Of this, investment in energy transition (renewables, energy efficiency, electric vehicles, etc) amounts to only 0.34% of GDP, far smaller than Sanders’, Biden’s, or the EU’s plan.

It could be argued that this is because of limited potential for renewables due to the small size of South Korea. However, according to a recent report by the authoritative Korea Institute of Energy Research, South Korea’s potential renewable energy capacity is estimated to be around 557 megaton equivalent of oil (Mtoe) per annum. This is more than double the amount of total final energy consumed in 2014 (excluding non-energy use of primary sources) and over 10 times more than the total electricity generated (Hong et al, 2019).

When President Moon announced that South Korea would achieve zero carbon emissions by 2050 on 28 October 2020, shortly after a similar pledge by the Japanese prime minister and China’s declaration to be net-zero by 2060, there was fresh hope and praise from the UN Secretary-General Antonio Guterres that South Korea’s move was “a very positive step in the right direction”. However, environmentalists and news commentators soon pointed out there was challenging work still ahead to deliver concrete policies to achieve this, including enhancing the 2030 emissions reduction target, and addressing the country’s reliance on coal for 40% of electricity generation and its on-going plans for coal power projects at home and overseas (Kim 2020, Chang 2020).

Given all of the above, it would appear that despite the South Korean government’s ambitions in launching its Green New Deal, and the more recent setting of a 2050 climate emissions target, criticism about insufficiency seems to apply at the current moment. However, it also seems that President Moon is well aware of these criticisms. In the Climate Ambition Summit in December 2020, he stated that South Korea will raise the 2030 greenhouse gas emission reduction target in line with its stated aim of going carbon neutral by 2050. Finally, at the end of last year, Korean government has submitted a new 2030 target to the United Nations. However, the target is no more than the conversion of the current target (37% lower than BAU) into absolute terms, 24.4% below 2017 level, 536 million tCO2eq (see Government of the Republic of Korea 2020b, p. 34).

Table 1: List of Projects in the Korean New Deal

Table 3: Comparison of Korean Green New Deal with similar US and EU proposals

South Korea’s Green New Deal has been hailed as a milestone of East Asian environmental policy planning, carried out by a government in one of the richest and fossil-energy dependent countries in the world, with an ambitious vision for developing a sustainable economy. However, for all its detailed lists of fully costed policy projects, the ambition of the Korea’s Green New Deal (together with the newly submitted targets which is no more than conversion of existing ones) lags behind similar US and EU plans in terms of climate targets (especially 2030 targets) and projected amounts of investment in proportion to GDP.

If South Korea seeks to be a model for a sustainable society internationally, the national government must raise its ambitions and greenhouse gas targets higher, in line with the IPCC’s call, and mobilise its advanced technology, talented citizens, and fiscal power as a sovereign government. It might then truly step up to the global climate change challenge. Indeed, the recent statements of President Moon seem to show that he is well aware of current limitations, and will move the country in the right direction.

A Japanese version of this article and a translation of the Korean New Deal policies into Japanese language can be accessed here.